Any one-sentence definition of capitalism will be incomplete, but as these things go, Schumpeter has a good one: “Capitalism is that form of private property economy in which innovations are carried out by means of borrowed money.” The emphasis is mine, but Schumpeter makes clear that capitalism isn’t capitalism without credit.

It’s one of the many contradictions of capitalism, however, that what drives it – the speculative advance of money – also periodically stymies it. This is obviously true in financial crises. But as Stephen Cecchetti and Enisse Kharroubi have documented, finance also carries costs in advanced economies during times of calm. In a series of papers going back to 2012, the two show that growth of the financial sector helps only up to a point, after which it becomes a measurable drag.

In their latest paper, Cecchetti and Kharroubi – both economists with the the “central bankers’ central bank,” the Bank for International Settlements – try to drill down on the mechanisms by which hypertrophied financial sectors threaten economic growth. The headline finding: credit growth, measured by the change in lending to the private sector, is associated with weaker per capita economic performance in advanced economies.

“Real GDP and real credit growths are correlated as would be expected, positively,” they write. “But in the case of real GDP per worker, the correlation turns negative. As real credit grows faster, labour productivity growth declines.”

The pattern also holds if you measure productivity growth against the rise in the share of bankers employed in an economy.

Why does credit growth hurt the economy? After dispensing with some alternative explanations, Cecchetti and Kharroubi lay out a properly Schumpeterian model: Entrepreneurs populate a small open economy, borrowing  funds to pursue profitable ventures. Their task: choose between high-risk/high-reward or low-risk/low-reward investments. In this model, abundant credit has the counter-intuitive effect of dampening the kind of entrepreneurial risk-taking that grows the economic pie. Entrepreneurs “tend to invest in safer, less productive projects when borrowing is larger,” the authors write. Thus “a higher growth rate of credit reduces the growth of total factor productivity as well as the growth rate of aggregate output.”

Abstract as the model is, it does make concrete predictions, notably that credit growth will have disparate effects on businesses depending on how easily they can take out loans. Accelerating credit expansion “tends to generate a disproportionate drop in growth for entrepreneurs with a lower borrowing capacity relative to those with a larger borrowing capacity.”

Borrowing capacity has to do with holdings of physical assets – factories, equipment, etc. Just as homeowners can borrow against the value of their house, firms get better rates by pledging their tangible assets as collateral. The prediction, then, is that industries that own a lower proportion of physical stuff – software companies, communications providers, etc – will have lower productivity growth during credit booms. The same holds for industries that lean heavily on risky research and development expenditures.

The data bear this out. “Credit booms harm what we normally think of as the engines for growth – those industries that have either lower asset tangibility or high R&D-intensity,” the paper finds. In this account, when credit gushes into an economy, the risky investments we tend to think of as depending most on borrowing actually dry up.

It’s heartening to see mainstream economists advancing from broad-brush findings that Too Much Finance is bad to more finely detailed accounts of how it’s bad. Cecchetti and Kharroubi have previously suggested a few pathways other than the one outlined above, including the tendency of highly remunerative banking jobs to lure talented people away from more productive careers. The present paper breaks new ground in the how department. But it still leaves me with a couple thoughts.

First, given the authors’ concern that the financial sector distorts the broader economy, I wonder why they continue to use such a broad measure as GDP as a proxy for overall economic success. Financial profits play an outsize role in modern measures of GDP, as Jacob Assa ably demonstrates in a recent paper on the financialization of GDP. Assa finds that a metric that deducts financial fees from the overall GDP did better in predicting the 2008 recession and puts the lie to the post-1990s “Great Moderation” in economic volatility.

But my bigger issue is that Cecchetti and Kharroubi’s entrepreneur-centric model, while predictive in certain ways, departs too far from reality to illustrate the dynamics of present-day capitalism. It’s questionable whether we can even approximate the complex interplay of corporate executives, investment banks and asset managers with a representative utility-maximizing entrepreneur whose only task is to order from a menu of investment projects. 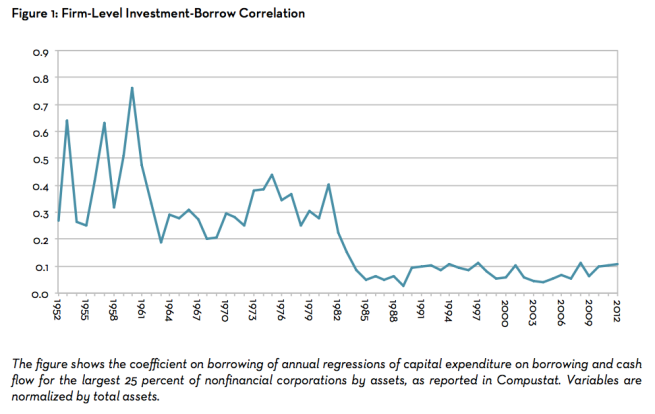 If you want to design a model that comprehends the borrowing and investment dynamics of modern industry, it has to accept that credit serves purposes beyond that of financing innovation. The economy of small entrepreneurs long since gave way to the shareholder revolution. And here, finance played a central role.

I am a PhD student in economics at the New School for Social Research and a research associate at the Schwartz Center for Economic Policy Analysis.